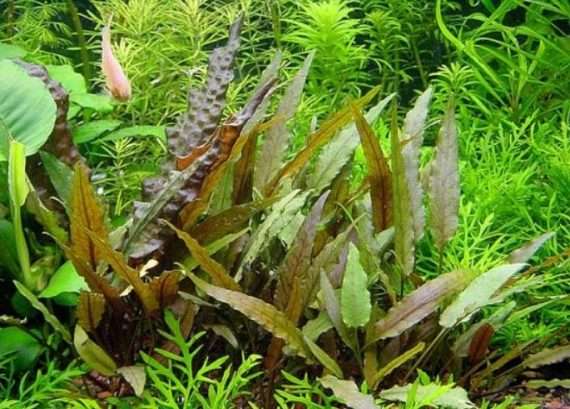 Good substrate and benefits from additional CO2. One of the best crypts for the aquarium. Slow growing and may take several weeks to settle in.
Probably the oldest cultivated crypt. It grows very easily in even hard water. The substrate should be a mixture of sand, clay and peat.
It prefers a quiet situation and not too intense a light. It normally spreads and multiplys by vegetative (stolon/rhizome) growth. It can suffer from crypt melt and seems to dislike being moved about.

What you will receive:

Good substrate and benefits from additional CO2. One of the best crypts for the aquarium. Slow growing and may take several weeks to settle in.
Probably the oldest cultivated crypt. It grows very easily in even hard water. The substrate should be a mixture of sand, clay and peat.
It prefers a quiet situation and not too intense a light. It normally spreads and multiplys by vegetative (stolon/rhizome) growth. It can suffer from crypt melt and seems to dislike being moved about.

Eleocharis vivipara is a species of flowering plant in the sedge family known by several common names, including umbrella hairgrass, sprouting spikerush, and viviparous spikerush. It is native to the southern United States from eastern Texas to eastern Virginia.[2] It takes the form of a clump of thin stems. A spike of flowers appears at the tip of the stem. The plant may also reproduce by growing a plantlet and runners.[3]
Eleocharis vivipara may grow in the water or on land. When it is aquatic it uses C3 carbon fixation pathways for photosynthesis. When it grows out of the water it switches to the C4 mechanism.
This species grows along the margins of water bodies, such as ponds, marshes, and ditches.

Hygrophila polysperma is a wetland plant that can occur as a submerged or an emersed plant. It inhabits lakes, streams, marshy areas, ditches, and rice-fields (de Thabrew 2014). This species can grow in water at depths up to 3 m and on stream banks as an emersed plant (Nault and Mikulyuk 2009). Hygrophila polysperma can inhabit habitats with a variety of environmental conditions. It favors warmer waters of 18-30°C but can tolerate water temperatures as low as 4°C (Kasselmann 1995, Ramey 2001, Rixon et al. 2005, US EPA 2008). It grows in waters with pH of 6.5-7.8 (Spencer and Bowes 1985, Doyle et al. 2003) and water hardness of 30-140 ppm (Nault and Mikulyuk 2009). This species has low light saturation and compensation points, so it is capable of photosynthesizing in low light levels (Doyle et al. 2003). Hygrophila polysperma exhibits low seasonality and can maintain shoot biomass year round (Spencer and Bowes 1985). Growth rate is dependent on water temperature and daylight (Nault and Mikulyuk 2009), and can increase dramatically in the presence of nutrient inputs (Sutton and Dingler 2000). This species can draw CO2 from both the water and atmosphere (Doyle et al. 2003).

Hydrocotyle leucocephala inhabits wet and marshy habitats from northern Central America to southern South America. Owing to its ease of growth and suitability as an aquarium plant, it has long been common in the hobby and may be obtained from a wide variety of sources. It has no widely used synonyms in culture.

H. leucocephala has alternate leaves that form along a creeping stem from which its half-dollar sized and shaped leaves appear. It is one of the easiest plants in cultivation and is suitable for almost any aquarium. It isnï¿½t at all picky about light or carbon dioxide levels and will do well in tanks where many other species donï¿½t. Warm temperatures are not a problem, making it suitable for planted discus tanks. Its leaves tend to turn yellow along the edges with insufficient iron, but that is easily remedied with the addition of a micronutrient supplement containing iron. Although it will do well in less than optimal conditions, H. leucocephala absolutely thrives and reaches its highest potential when light, carbon dioxide and nutrients are in abundant supply. Emersed culture is rarely a problem and is very productive.

An interesting fact about H. leucocephala is that it is edible. The leaves have a slight peppery taste and are used as a spice and even the basis for a soda in some parts of the world.

Java fern is one of the most popular plants in the aquarium hobby, due to its aesthetic appeal and ease of care. Several cultivars of Java fern exist. These include the “narrow leaf” Java fern, the “needle leaf” Java fern, the “Windelov” Java fern, the “trident” Java Fern, the “lance leaf” Java fern, and others. Cultivation in the aquarium is not problematic as long as the rhizome is tied to rock or driftwood and not planted directly into the substrate. Propagation can be done by attaching small adventitious plants, formed on the older leaves, to a rock or driftwood. This is most often done with thin wire, cotton thread, a zip tie, a rubber band or fishing line. This plant does particularly well with fish that are normally detrimental to plants, on account of its relatively bitter taste.